Girl at the Edge (Paperback) 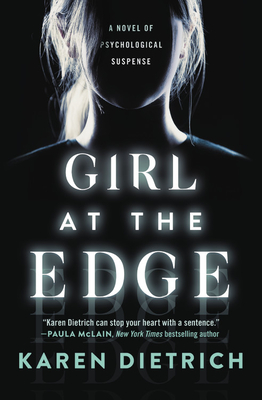 "Karen Dietrich can stop your heart with a sentence."
--Paula McLain, author of The Paris Wife
Not a single resident of St. Augustine, Florida, can forget the day that Michael Joshua Hayes walked into a shopping mall and walked out the mass murderer of eleven people.
He's now spent over a decade on death row, and his daughter Evelyn - who doesn't remember a time when her father wasn't an infamous killer - is determined to unravel the mystery and understand what drove her father to shoot those innocent victims.

Evelyn's search brings her to a support group for children of incarcerated parents, where a fierce friendship develops with another young woman named Clarisse. Soon the girls are inseparable, and by the beginning of the summer, Evelyn is poised at the edge of her future and must make a life-defining choice. Whether to believe that a parent's legacy of violence is escapable or that history will simply keep repeating itself. Whether we choose it to or not.

Karen Dietrich is a writer of fiction, poetry, and memoir. She earned an MFA in poetry from New England College. She also writes music and plays drums in Essential Machine, a band she formed with her husband. Karen was born and raised in southwestern Pennsylvania and currently lives outside Pittsburgh with her husband and son.

"Dietrich has a writing style that feels like a breath of fresh air in a genre that sometimes suffers from a sense of sameness, and her characters and their dialogue are exquisitely rendered. A fine psychological thriller."
—Booklist

"The psychological-thriller genre may be packed with books that sound alike, but this one feels fresh - Memorable and disquieting."
—Winnipeg Free Press

"Not easy to walk away from after reading the last page. Readers will find Evelyn's inner turmoil and actions haunting, and will likely never view a news story about yet another mass shooting the same way again."
—JHSeiss.com